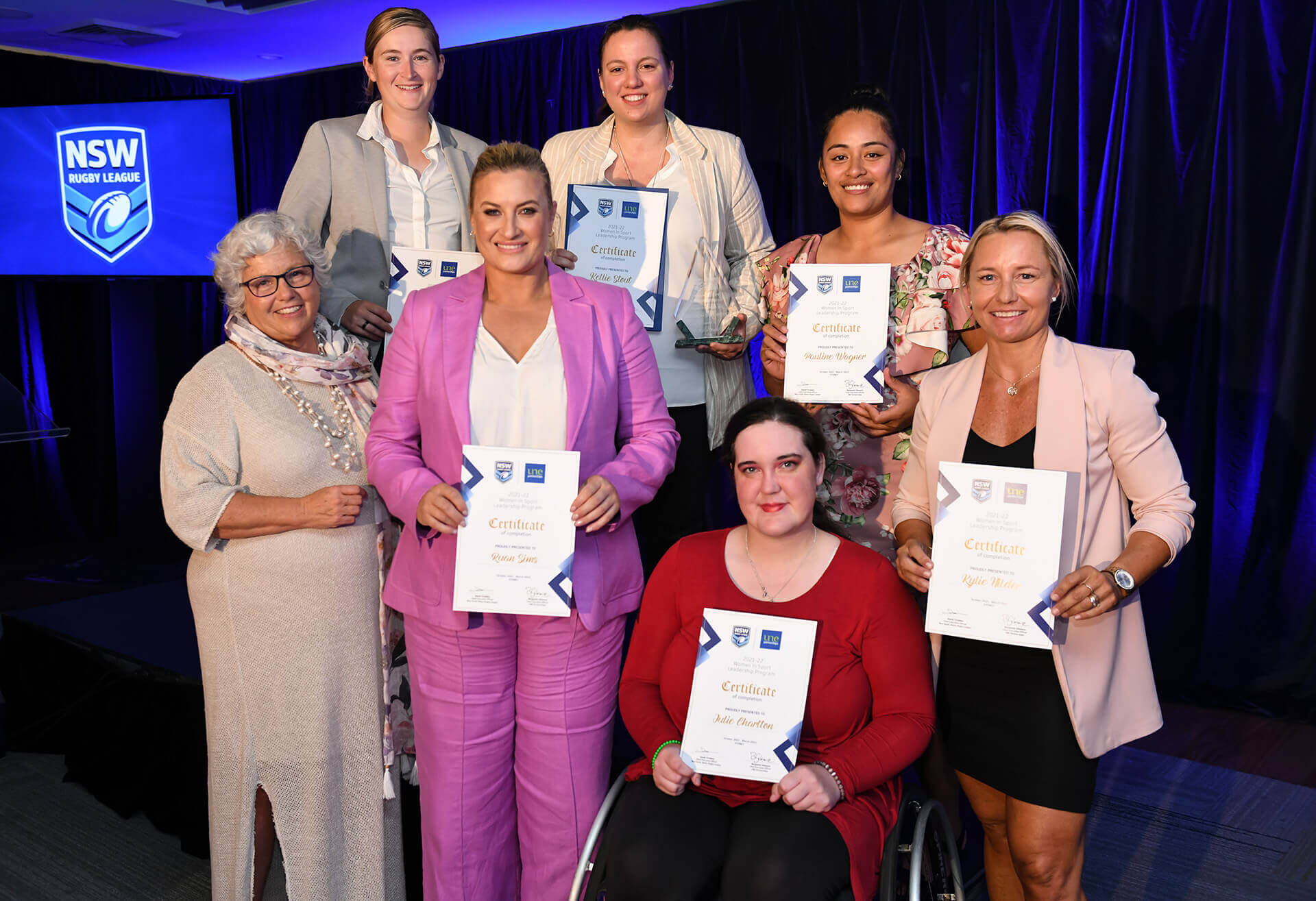 Levelling the playing field for women

Levelling the playing field for women

Improving pathways for women’s leadership – and participation – in sport is the end game of a unique program just delivered by UNE in collaboration with NSW Rugby League (NSWRL).

The Women in Sport Leadership Program has sought to empower women leaders in rugby league, rugby union, soccer and wheelchair athletics through a series of workshops and individual mentoring. The first cohort of 13 women heard from head NSW Blues State of Origin coach Brad Fittler and Channel Nine sports presenter Emma Lawrence in two of the four face-to-face workshops that complemented 20 weeks of online learning.

As well as learning the practical theories and principles of coaching, participants discovered how to develop their emotional intelligence, communications and media skills as they mapped out personal and professional goals. The emphasis on inspiring and motivating women athletes is certain to have far-reaching benefits.

An era of growing women’s participation in sport

“The program was designed to strengthen education and career pathways for women in sport leadership roles,” Benjamin says. “Whether this is junior sport in our regions or semi-professional sport, we hope it has helped to build the skills and confidence women need, thereby providing more career opportunities for them.”

NSWRL Female Pathways Manager and NSW Sky Blues Coach Kylie Hilder, herself a course participant, says the program will have direct applications for her as one of just two women coaching elite rugby league. A former touch football and rugby league player, who has represented her state and Australia, she is committed to helping women to rise to the top of their game.

“I work in a very male-dominated environment in rugby league and we need more women coaches at all levels.”

“I work in a very male-dominated environment in rugby league and we need more women coaches at all levels,” she says. “They need the opportunities, but also the tools to gain the confidence to take up those opportunities. Rugby league is evolving – it’s no longer just about the men – and women are highly capable of assuming leadership roles within women’s and men’s teams.

“As a female player, who has mostly had male coaches, I know that women are wired differently – emotionally and mentally. Understanding how the female mind ticks, and being able to communicate effectively with women, is critical to getting the very best out of them as athletes. What we have learnt during this program will be valuable in our professional but also our personal lives.”

The Women in Sport Leadership program builds on UNE’s long-term partnership with NSWRL, which began in 2019 with sports-related teaching and research programs. The focus on women’s leadership represents an exciting opportunity, according to NSWRL Chief Executive David Trodden.

“The Australian sporting sector has the potential to become a leader in gender equity.”

“The Australian sporting sector has the potential to become a leader in gender equity, but to achieve this we need to enhance the recruitment and retention of women leaders, coaches and match officials,” David says. “We hope this program will help enable women to explore greater career opportunities. It not only supports the development of the Women’s Rugby League competition; it promotes the advancement of women into senior coaching and leadership roles in other sports and workplaces, too.”

For mother of three Paula (Pauline) Wagner, from Kyogle in northern NSW, the program offered a chance to improve the way she thinks as an individual, coach and community leader. She began coaching her son’s touch football team six years ago and now coaches a female league tag side. But, as a regionally-based league player, she has been frustrated by the lack of pathways for junior and senior competitors.

“Being a part of this leadership program has shifted my thinking, about the kind of leader I want to be and how I handle situations,” says the 2021 NSW Female Community Coach of the Year. “People in regional areas rarely get the chance to have such professional development, and what I have learnt in the past about coaching has almost entirely been from men. It was amazing to learn from other women.

“My goal is to one day coach at the elite level, but for now I want to support my community and women in rural areas, so they get the same opportunities as sportspeople in the cities. Many women would feel more comfortable if they were coached by a woman. If my daughter wants to play sport when she grows up, I want it to be easier than it has been for me for her to follow her dreams.”

Adapting to learning styles and abilities

Advancing women’s leadership also stands to improve equity in sport, according to elite para athlete and athletics coach Julie Charlton. She’s been coaching since the age of 16 and currently works with eight athletes as she completes her Bachelor of Sports Coaching and Management.

“But there are only about 12 para-specific coaches across Australia and few of them are women,” Julie says. “I am passionate about growing my level of emotional intelligence and helping other athletes get through situations that may be hindering their performance. As a coach, you encounter so many different kinds of people, who don’t think the same way and learn and perform the same way. You need to be able to adapt to different styles and ability levels to help them to meet their goals.”

Julie says coaches with a disability don’t readily feel they can take part in leadership coaching of this kind. “It’s an important step in growing the women coaching base across all para sports,” she says. “By doing that, we will encourage more women into a range of sports.”

Given the success of this pilot leadership program, the NSWRL will be offering the program to female coaches from all interested sports across the state in September.